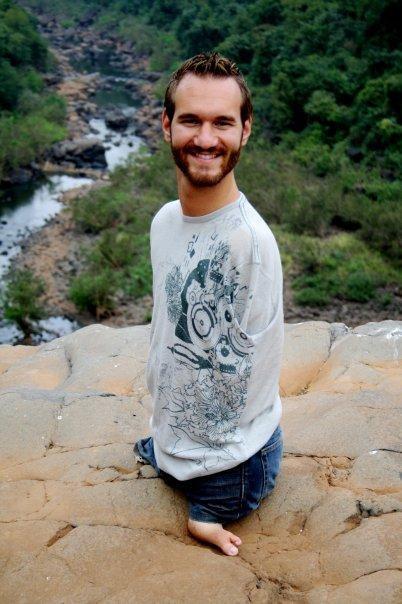 “Are you going to finish it strong? Are you?” You may try couple of times but most of the time at some point you may abandon it. All of us have so many excuses for that.

I didn’t come from a rich family so I didn’t get the same opportunities.

List of excuses will continue like that. But think about a person who has NO ARMS, NO LEGS. If I’m saying that there is a person who has born limbless & where he is the president of an international non-profit organization, and also has his own motivational speaking company- “Attitude Is Altitude”. Do you believe a limbless person can do it? Most probably “No” right.

“Nick Vujicic” born in 1982 in Melbourne, Australia. He came into the world with neither arms nor legs. Pastor Borris Vujicic & Dushka Vujicic was not expecting a limbless child as their first born, brand new baby boy. They didn’t have no family history to expect this condition so imagine the shock they felt when they saw their baby boy.

How he’s going to survive in this planet without his limbs? What happens to his future after they die? But for sure they won’t think this limbless baby will be a motivational speaker someday & touch people’s heart all over the world.

Nick had to face several difficulties and challenges in his school as well as in his life. He was struggling to survive with loneliness and depression due to his unfortunate disability. He tried on electronic arms and hands as well thinking that he would be able to live his life like a normal child. But he realized that they were quite heavy for him to bare and they were effecting his mobility. Finally, he gave up those electronic arms and started doing things his own.

By age 10, Vujicic attempted to commit suicide in his bathtub and failed. But things started changing when he accepted the life the way it was. He tried to do more and more things on his own. He further continued his studies and obtained a double bachelor degree majoring in accounting and financial planning after he left school.

At the age of 19 Nick started his journey of motivational speaking. He traveled around the world, sharing his story with millions of people. Through his incredible sense of humor, he touches to children, teens and adults.

Currently he has shared his message of hope to over 6 million people in 57 countries. According to Nick, the victory over his struggles throughout his journey, as well as his passion for life can be credited to his faith, his family, his friends and the many people he’s encountered during his life who have encouraged him along the way.

In 2005, Nick was nominated for the “Young Australian of the Year” award, which is a large honor in Australia. In 2010 Nick published his first book Life Without Limits: Inspiration for a Ridiculously Good Life and has been translated into over 30 languages. Unstoppable, Limitless, Stand Strong and Love Without Limits were some other books that he has published. He made a short documentary motivational DVD, ‘Life’s Greater Purpose’ in 2005.

Nick married Kanae Miyahara on February 12, 2012 and it was a love marriage. Now he is a loving father of two sons and for identical twin daughters. He always tell people not to give up, because according to his vision miracles only happens if people try.

What do we lack in our lives? Giving excuses & dreaming won’t work at all if we didn’t try. If Nick Vujicic has that ability to make his life a better one, so why can’t we?