Most modern web apps use Angular for a rich and efficient front-end user experience. Angular supports multiple platforms and increases app performance and productivity. Web UI test automation frameworks such as Selenium WebDriver have limitations when interacting with Angular apps. The locators in these tools do not include Angular specific html attributes. Also these tools aren’t aware of the page load time of an Angular web page, which results in using extensive Sleep() and Wait() method calls in the code. Most of you might have done this in your selenium tests, which causes our tests to fail because the UI elements are not ready even after so much of waiting.

The Angular team has come up with a solution for this limitation, Protractor – a test tool written on top of WebDriverJS. It is a Node.js program and runs tests written in JavaScript. Protractor actually uses WebDriver to control browsers and simulate user actions. This results in performing actions on UI elements as a real user would. It is written as a wrapper for the JavaScript Selenium WebDriver. It includes the capabilities of WebDriver and additional accessors to Angular models and bindings.

Protractor supports JavaScript and Node.js based frameworks such as Jasmine and Mocha. However, Jasmine is the default framework that comes with Protractor, so we will be using Jasmine syntax in our examples.

Let’s look at how we can install and start using Protractor to automate some simple scenarios.

This is a simple test method to launch a URL and login using valid credentials. Then asserting using ‘expect’ if a particular title appears on the UI. The ‘describe’ and ‘it’ syntax comes from the Jasmine framework. ‘browser’ and ‘element’ are global variables in Protractor.

Conf.js file has the configuration details Protractor needs. It specifies what spec files should be run, what is the framework to use (Jasmine), name of the selenium server etc. The defaults are used for other configurations. (E.g., default browser: Chrome)

You will see a chrome browser window open up and navigate to the specified URL, then perform the login action. Once the assertion is passed using the ‘expect’, then a test execution log will be displayed on the command prompt.

If you want to add multiple scenarios in one spec.js file then it would look something like this: 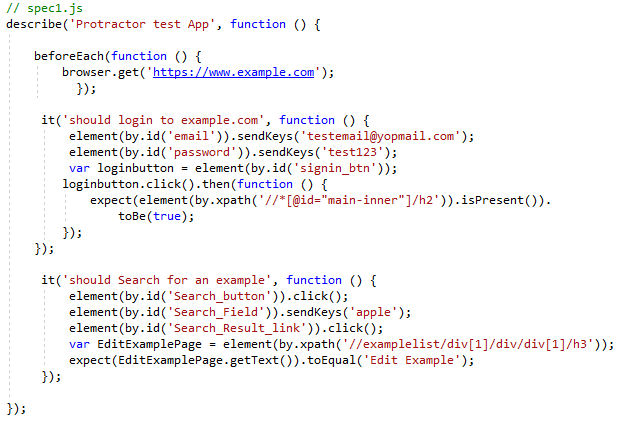 The ‘beforeEach’ and multiple ‘describe’ ‘it’ keywords will support having multiple scenarios on the same spec.js file. Congratulations! You just ran your first Protractor test!

How does Protractor work so well with Angular UIs?

As we discussed earlier, WebDriver fails to work on Angular UIs because of the limitations in WebDriver locators and failure to predict the page load time. When a driver.findElement() is called and a WebElement object is returned, the WebDriver immediately sends a command to the browser asking it to locate the element.

If we want to perform a button.click(), then this action fails because the page is not loaded yet for the browser to locate the element. Angular performs a life cycle operation in the backend before the UI is fully loaded, if the UI elements are not loaded instantly it will fail to perform any action on it. This will result in our entire Selenium test method to fail.

In Protractor, the element() global variable will locate the element, but will not send a command to the browser until an action (E.g. button.click()) is performed.

This will store the locator information until an action is performed. The button.click() will tell the browser to find the element and click it. This will allow the action to be performed only when the UI elements are loaded, therefore actions on Angular UI elements is more reliable in Protractor.

Protractor methods are asynchronous and return promises. Let us look at an example to understand this.

In the above example test script, we can write the commands in an asynchronous style. However, in Protractor, WedDriverJS actually maintains a queue of pending promises: this is called the control flow. Therefore, Method 2 in this test script will run only after Method 1 is resolved. This makes Protractor tests much more reliable because the Method 2 sendkeys() only happens when the UI element is ready for the action. These features make Protractor a powerful tool to use against Angular UIs.