There are situations when we have to work on several projects that are dependent on each other. For example, let’s say, we are working on a project that needs a library found in a remote GitHub repository. What do we do at such a time? We can clone that library repository somewhere else in the local machine, then copy the whole code to the necessary place in the main project. That’s not that difficult.

But, what if the library repository keeps being updated often with new features ?? Most of the time, a solution’s front end resides in a separate repository while the backend is maintained in another repository. You probably need to present the whole project in one Git repository. What do you do at such times?

If there is a huge project with many modules that are maintained by separate teams allocated for each module, will it be easy to maintain a single repository with many branches, pull requests, etc?

There are two options you can go for. Either Git submodules or subtrees. Choose the best that suits your needs.

I’ll show you how to set up submodules step by step with commands. It’s so simple but there are a few things you need to keep in mind also. I’ll explain the steps with sample demo repositories.

Initially, the parent repository contained only the README.md file.

The other two repositories contain a text file named mytext.txt in addition to the README.md files.

To add a repository as a submodule in the parent repository, you have to run the following command.

For me, I run, git submodule adds https://github.com/Udith-Gayan/submodule-one.git.

In addition to that, it creates another file named .gitmodules, in which the reference for the submodule is stored as follows.

Now you can commit and push the changes. Once pushed, you can view the GitHub repo below.

Next, I am going to add the second submodule, just following the same command used earlier. I run, git submodule add https://github.com/Udith-Gayan/submodule-two.git

Then, the .gitmodules file gets updated as follows,

After committing and pushing, the GitHub repo looks like this.

Here we are going to see how to clone a repository that has submodules in it. You can do it in two ways. Run

Let’s see how to work with git subtree. 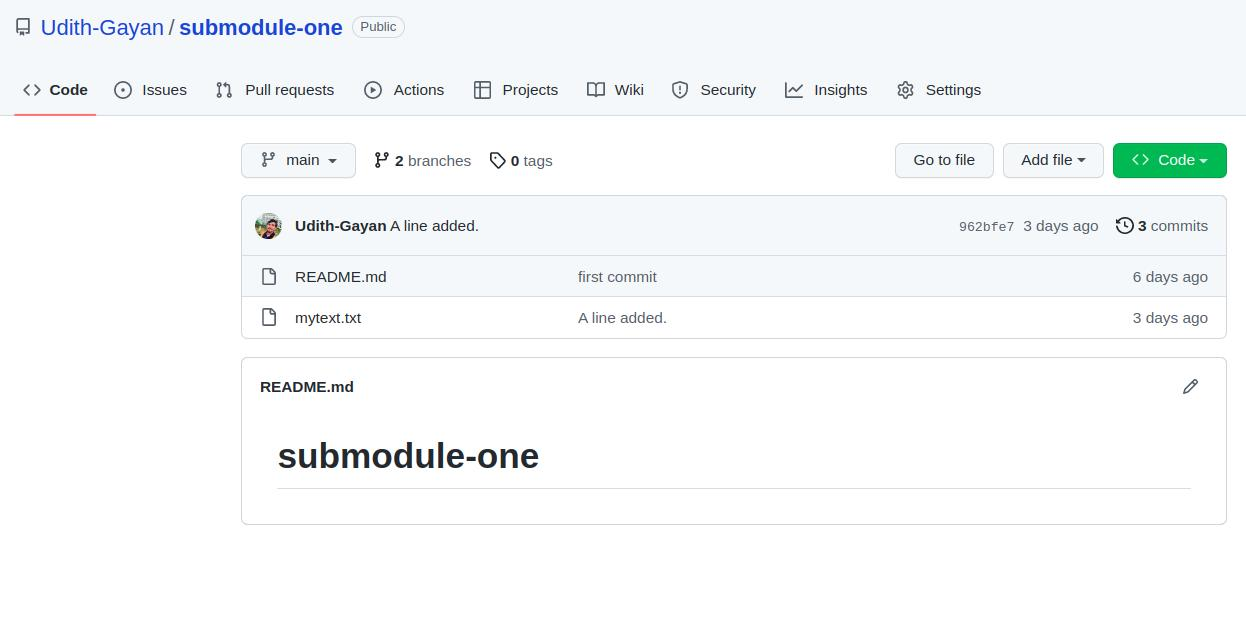 To add a sub-repository to a super repository, you must follow the steps below. It’s just a single command at the end.

For example, I run this command locally in the terminal inside my Parent-Repository-2 project.

You will see, a folder named submoduleOne has been created and inside it, you have all the files in the main branch of the sub repository. This command creates two new commits including the sub-repository’s code. If you run the git log command, you will see a response similar to this below.

By running git push, you can push the commits to the parent remote repository as usual. This is how it looks after pushing.

If you want to pull in any new commits to the subtree from its remote, you just have to run the same code and replace ‘add’ with ‘pull’.

If you make a change to anything in submoduleOne the commit will be stored in the parent repository and its logs. That is the biggest change from submodules. If you now want to update the subtree remote repository with that commit, you must run the same command, excluding –squash and replacing ‘pull’ with ‘push’

Comparison of subtrees and submodules

Let’s see some differences between the git submodule and the git subtree.

● Git submodules have a smaller repository size since they are just links that point to a specific commit in the child project, whereas Git subtrees house the entire child project along with its history.

● Git submodules need to be accessible in a server, but subtrees are decentralized.

● Git submodule creates a ‘.gitmodules’ file whereas no extra file is created in the git subtree.