Today the terms “left” and “right” are used as symbolic labels for many things. It can be a direction, or as a grouping term, etc. Even In our country we frequently hear about left and right for decades in political discussions. Has anyone thought about what do they mean? Where did it begin? Do you believe physical seating arrangements among politicians caused the beginning of this political grouping? To get a clear idea we must go back in time to the summer of 1789, The French revolution era.

Back in July of 1789, France had already experienced a rough summer that included food shortages, high taxes (as a solution to King Louis XVI’s debts), and the militarization of Paris. Sensing distress, during this time as the revolution gained steam, an angry mob had just stormed the Prison of Bastille. As a result, The National Assembly assembled to act as the revolution’s government. National Assembly had one principal goal. A new constitution. The main issue discussed in this assembly was how much power the king should have. Should he get the absolute veto power or not. This debate continued.

Those who thought the king should not have veto power sat on the left of the president of the assembly and those who were loyal to religion and the king took up positions to the right to avoid the shouts, oaths, and indecencies. Later the National Assembly was replaced with other organizations, but the seating arrangement continued. 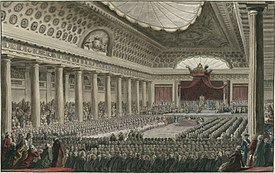 Following the Insurrection of 31 May – 2 June 1793 of the French Revolution the many members sat on the right side was deserted and the remaining members had to sit in the middle of the assembly. However, after 1794 the method of seating was abolished. The new constitution was introduced, and political parties were again formed. The majority of ultra-royalists chose to sit on the right. The “constitutionals” sat in the center while independents sat on the left. The terms extreme right and extreme left as well as center-right and center-left came to be used to describe the ideologically different sections of the assembly.

Generally, the left-wing is stand for freedom, equality, fraternity, rights, progress, reform, and internationalism while the right-wing is stand for authority, hierarchy, order, duty, tradition, reaction, and nationalism. Also, Movements of trade unionism have also been associated with the left.

At that time the whole world was looking at the French revolution and Its effects ware eventually make its way around the world. At one point the effects of the French revolution reached the Bolsheviks in Russia. They became a part of caring about the legacy of the French Revolution. They gave it a different meaning. Leaning toward the left generally meant embracing a radical international worker revolution and leaning to the right generally meant adopting some sort of national sentiment.

Over time the differences between left and right have changed. Initially, at the time of the French Revolution, it was divided into supporters of absolute monarchy (the Right) and those who wished to limit the king’s authority (the Left). But during the 19th century, it was between monarchists and republicans. And later it becomes supporters of a strong executive on the Right and supporters of the primacy of the legislature on the Left.