These days it is hard to walk the streets without running into someone who is anxiously looking at their wrist to see if they are on target to reach the magic 10,000 steps.

Is it really a goal worth striving for, or might there be something better?

And where did that figure come from?

You might be surprised to hear it was the result of a 1960s marketing campaign in Japan.

In the run-up to the 1964 Tokyo Olympics, a company came up with a device which they started marketing to the health-conscious.

The device was an early pedometer, based on the work of Dr.Yoshiro Hatano, a young academic at Kyushu University of Health and Welfare.

Dr.Hatano was worried that the Japanese were busy importing a slothful American lifestyle, as well as a love of watching baseball, and wanted to help them get more active.

He reckoned that if he could persuade his fellow Japanese to increase their daily steps from 4,000 to around 10,000 then they would burn off approximately 500 extra calories a day and remain slim.

It was clearly a great marketing success. But is it still the most effective way to improve our fitness?

During the past 3 years, I have been walking without considering 10,000 steps a day. Designed my own game plan based on following parameters.

(+) The entire story is based on an old school thought of pedestrianism.

(+) The idea is to walk briskly, minimum of 45-60 minutes a day, reaching a target of 4 kilometers from point A to B in a continuous time line.

(+) Whatever the rest, that is from point B to C is an accumulation of short distances (such as from home to bus stand and Bus stand to office, to shops and back) will get added on to the daily distance.

(+) Daily distance would be recorded on a spreadsheet.

At the end of the month : 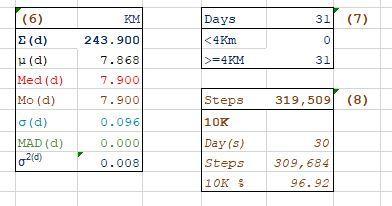 There are 12 sheets in a workbook containing distances for each month.

Walking 10,000 steps a day means casual walking for many.

Such walks are better than being stationery for long time.

(+) Number of steps is a byproduct of distance that you do.

(+) The heart rate during a brisk walk matters a lot.

(+) A brisk walk for 30 to 45 minutes and casual walks for a day for all week long had a positive impact.

(+) Streets were my treadmill.

Metabolic syndrome has become an issue affecting health of many people worldwide.

World Health Organization had their own survey in Sri Lanka, in 2015.

(*) Majority of hospitals in Sri Lanka both in public and private sector does not publish the causes of deaths.

Crux of the matter.

In my case, walking has been a constant companion, something to look forward to.

Yes, walking had a positive impact on my metabolism without any aid from smartphones loaded with apps, pedometers or similar devices.

Learn from yesterday, live today, hope for tomorrow. The most important thing is not to stop questioning.