There is a saying that “Once a year go somewhere you have never been before.” Unfortunately, now we all missed travelling due to this pandemic situation. Since we cannot exactly say when we can travel again like before. We have to live with the travel memories that we had before this pandemic. So, I thought to share highlights of my experience of travelling Dubai before COVID 19 Pandemic hit the world, I travelled to UAE with my wife in the latter part of the 2019 and stayed there about a week.

When the early morning sunlight touches the ground, my Emirates EK 649 flight was in Emirate’s Airspace. To the horizon what I can see is endlessly long & impressive sand valleys and lights of the highways in the middle of the desert. It was quite a nice scenery. 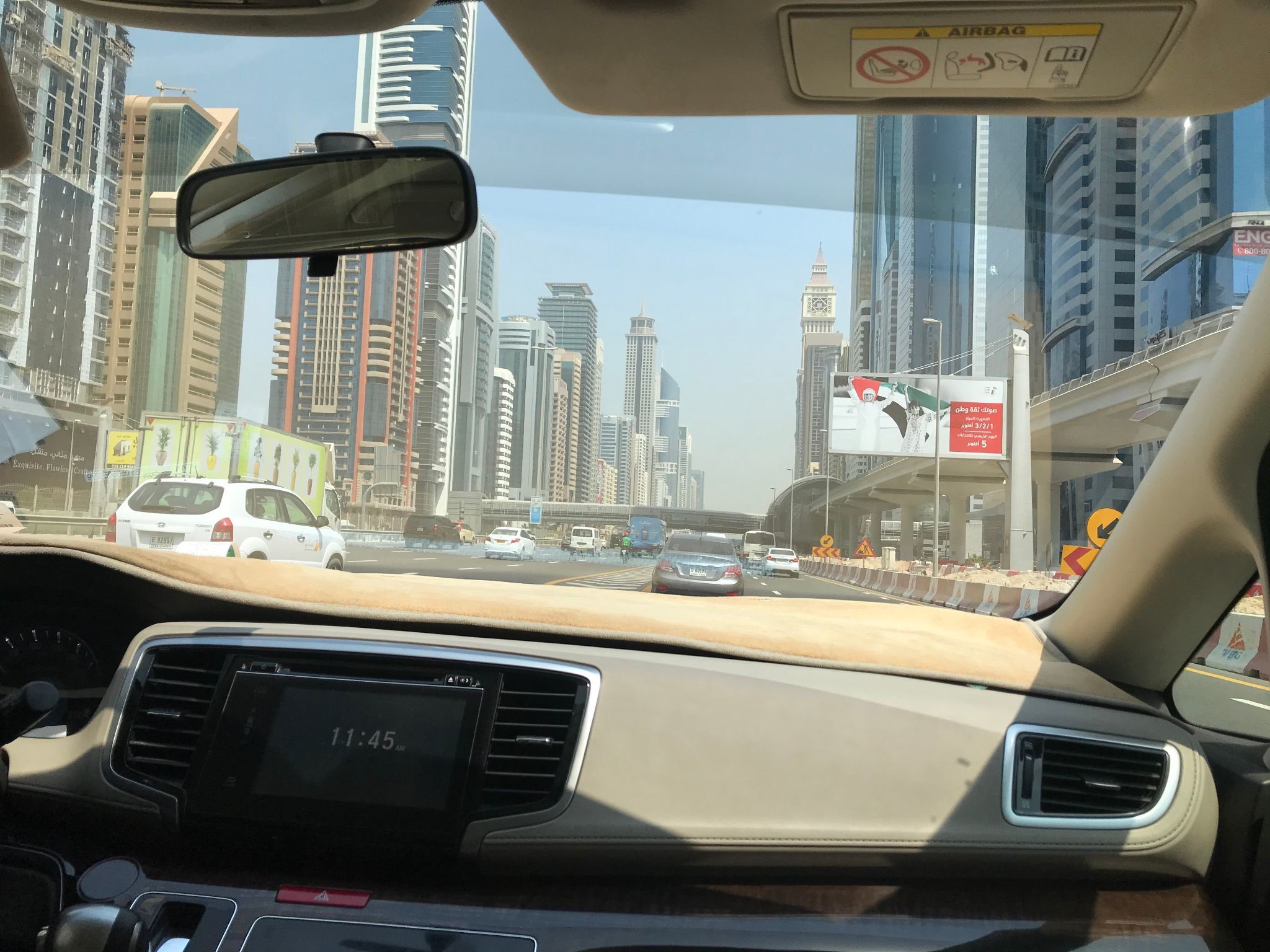 As we came out of the Dubai International Airport, first place we went was Al Ain. Since some of my relatives are there, before exploring Dubai, We have spent a couple of days in Al ain as well. The Distance to Al Ain from Dubai is 152km but It only took less than 2 hours to Al Ain via E66 highway.

Al-Ain is known as the “Garden City” of the UAE and It is the largest inland city in the Emirates. During my stay we went to Bawadi Mall which is one of the largest mall in Al Ain and Al Ain Zoo which is the United Arab Emirates’ largest zoo.

After coming back to Dubai from Al Ain, first place we went to see is the Dubai Mall. It is the largest mall in the world by total land area. In 2019, 84 Million visitors visited the Dubai Mall. Dubai Mall has so much more to offer than just shopping. Dubai Mall Waterfall and The Aquarium enough to kill most of our time there.

The Dubai Fountain is the world’s largest musical fountain. It can spray 22,000 gallons (83,000 liters) of water in the air at any moment. More than 6,600 lights and 25 color projectors have been installed. Shows are there daily 6PM to 11PM (Every 30 minutes)

We have watched the show from Waterfront Boardwalk outside the Dubai Mall. It has one of the best views but before every performance, people from the mall and other areas gather there in huge numbers. The water at the Dubai Fountain dances to various choreographed melodies which leave us mesmerized.

Dancing Glory of The Dubai Fountain

Desert Safari was the unique experience in our journey. These Safaris are designed to offer you an electrifying and thrilling experience in the safest and most convenient way.

Next day, since we have planned to go for Desert Safari, we spent the morning in the hotel and the near bazaar. Our Desert Safari driver with his Toyota Land Cruiser V8 came to pick us from the hotel around 3 pm. We travelled around one hour from Dubai city through the highway. Then we reached a camping area with full of tourists. While our driver reducing the tire pressure to enter the sandy desert, we have taken photos with falcons. Falcon is the national Emblem of the United Arab Emirates. Tourists can get Desert Quad Bike riding experience in there which we did not have the chance due to time limitation.

We have entered the sandy desert after another short distance drive. It was like a boat navigating through rough seas. The SUV is going over the dunes at varying speeds and flying up into the air as you bash against the golden dunes.

Hint - Just do not eat before you go as it makes your stomach turn.

After 30 minutes of Dune Bashing, we reached a camp in the middle of the desert. Next in the schedule is a belly dance session with BBQ dinner. Although it was in the middle of the desert, the place was interesting. Tourists can take the Camel riding experience in there too. Since there was a time to start Belly dance session, we also had that. After the camel ride dinner was ready and we have enjoyed our BBQ meal while watching belly dances.

It was one of the unforgettable experience in my life. I think Dubai tour without going on a desert safari with BBQ Dinner is incomplete.

At the Top of Burj Khalifa -

The Burj Khalifa has been the tallest structure and building in the world since its topping out in 2009. It is three times as tall as the Eiffel Tower and nearly twice as tall as the Empire State Building. One of the lesser known and more interesting facts about Burj Khalifa is that the tip of the sphere of the Burj Khalifa can be seen from up to 95 kilometers away.

We went the Burj Khalifa tour in the morning. On the lower levels, there were several educational presentations about information regarding Burj Khalifa and how they built it, etc. The Burj Khalifa elevator took only one minute to take us to the 124th floor where the observation point was placed. Speed is 10 meters per second, making the elevators among the fastest in the world. We were able to observe the city of Dubai, Desert and Sea and can buy souvenirs from there.

Queen Elizabeth 2, often referred to simply as QE2, is a 293.5 m long retired British luxury cruise ship active from 1969 to 2008. She had been acquired by the private equity arm of Dubai and now reopened as a floating hotel in Port Rashid. We had our dinner on the ship, and it was a quite nice experience. Visitors can tour around the ship and get a glimpse of what life was like onboard the iconic QE2 during her sailing days.

We spent the morning half of that day visiting Jumeirah Beach, Bazaar and Waterfront Market.

These are some of the highlights of my tour. With the time limitations and other planned works, I missed to visit the places like Dubai Museum, Jumeirah Mosque and to get Desert Quad Bike riding experience. They are already on my list for the next visit, and I am sure there are much more. Dubai can offer the kind of experience you should definitely have.