Are you a coffeeholic?

If you are a coffeeholic you would agree with the above quote. This blog is for the coffee lovers who out there to expound regards to some of the known and unknown facts about coffee. There’s a lot to cover, so grab a cup of coffee and read on.

The history of coffee cultivation dates back many millennia to the old coffee forests on the Ethiopian plateau. There, according to folklore, the treasured beans were initially discovered by goat herder Kaldi. According to legend, Kaldi discovered coffee after seeing that his goats become so energized after consuming the berries from a particular tree that they refused to go to sleep at night.

The local monastery’s abbot received Kaldi’s results and used the berries to make a beverage. He discovered that it kept him awake throughout the prolonged hours of nightly prayer. The revitalizing berries became known after the abbot informed the other monks at the monastery about his discovery. Word spread eastward, and coffee eventually made it to the Arabian Peninsula, where it started a voyage that would take the beans all over the world.

The Arabian Peninsula was the origin of coffee trade and cultivation. Coffee was being grown in the Yemeni region of Arabia by the fifteenth century, and by the sixteenth century, it was well-known in Persia, Egypt, Syria, and Turkey.

Coffee was consumed not only in homes but also in the numerous qahveh khaneh, or public coffee houses, that started to spring up in cities all across the Near East. People frequented the coffee shops for all types of social interaction because of their unmatched popularity.

Travelers from Europe to the Near East returned with tales of a unique dark, black liquor. Coffee arrived in Europe in the 17th century and spread to other parts of the continent.

Some people reacted negatively to this new beverage, labelling it as the “bitter invention of Satan,” out of mistrust or dread. In Venice in 1615, when coffee first arrived, the local clergy forbade its use. It became so heated that Pope Clement VIII was requested to step in. Before making a judgment, he chose to taste the drink for himself. Because the drink was so fulfilling, he awarded it his seal of approval.

Coffee arrived in New Amsterdam, which the British eventually renamed New York, around the middle of the 1600s. Tea remained the preferred beverage in the New World despite the quick emergence of coffee houses until 1773, when the colonists rose up in opposition to a high tax on tea imposed by King George III. The Boston Tea Party uprising would permanently alter American coffee consumption habits.

Plantations Around the World

There was intense competition to grow coffee outside of Arabia as the beverage’s popularity grew. In the latter half of the 17th century, the Dutch at last received seedlings. They were unsuccessful in their initial attempts to plant them in India, but they were successful in Batavia, on the island of Java in what is now Indonesia. The plants prospered, and the Dutch soon had a successful and expanding trade in coffee. The cultivation of coffee trees was then extended to the islands of Sumatra and Celebes.

There are normally two varieties of coffee beans available for purchase in supermarkets, Arabica and Robusta. Is there a distinction between Arabica and Robusta, you might be wondering? Oh, there is for sure. Let’s begin straight away. 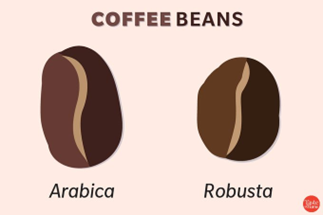 Without a doubt, Arabica coffee is the most widely consumed variety. Depending on who you talk to, a lot of coffee lovers prefer utilizing Arabica beans because of their flavour. Arabica beans provide a richer, more nuanced flavour that you may drink directly and are typically used for black coffee. Funny thing is, although being the most common, it has less caffeine than Robusta.

Arabica is the most widely used coffee, although Robusta is more affordable and robust. Robusta is commonly used for espresso drinks and in instant coffee mixes due to its bitter flavour. Grab a cup of coffee made with Robusta beans if your Monday morning is dragging. You’ll be immediately awakened by their high caffeine content!

The variety of drinks you can make with a few little beans—latte, americano, affogato—is amazing. There are so many different kinds of coffee drinks to try, whether you’re a novice or a coffee enthusiast. Here are a few of the most common coffees that people order. 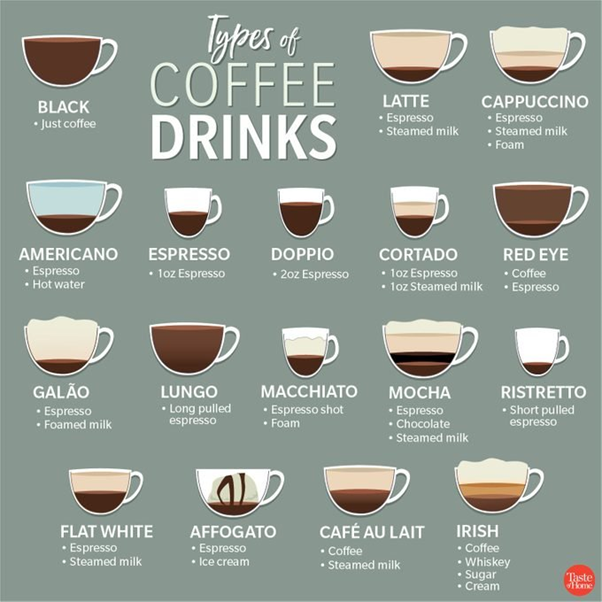 With ground coffee beans soaked in hot water and served warm, black coffee is as straightforward as it gets. Additionally, if you want to sound sophisticated, refer to black coffee by its formal name, cafe noir. The quality of coffee is particularly crucial because it isn’t enhanced with milk or sugar.

The latte, the world’s most well-known coffee beverage, consists of a shot of espresso, steamed milk, and a thin layer of froth. You can order it plain or with any flavor shot, like as vanilla or pumpkin spice.

A cappuccino is a latte that has more foam than steamed milk and is sometimes topped with cocoa powder or cinnamon. There are occasionally variations available that use flavor shots or cream in place of milk.

The americano, which consists of an espresso shot diluted in hot water, has a flavor similar to black coffee. A helpful hint: pour the espresso first, then add the hot water, if you’re preparing your own.

A single espresso shot can be served or used as the base for the majority of coffee beverages, including lattes and macchiatos.

The doppio, a double dose of espresso, is excellent for boosting your energy.

A cortado is the ideal synthesis of warm steamed milk and espresso, much like yin and yang. The milk is used to lessen the acidity of the espresso.

A red eye, so named after those annoying midnight trips, may brighten up any dreary morning. The combination of a hot cup of coffee and an espresso shot will undoubtedly speed up your heart rate.

This hot coffee beverage, which has Portuguese roots, is similar to the lattes and cappuccinos. The only distinction is that it has nearly twice as much foamed milk as the other two drinks, making it lighter.

Lungo is an espresso with a long pull. The amount of caffeine and the number of ounces you can consume increase with the length of the pull.

Another espresso-based beverage with a thin layer of foam on top is the macchiato. This drink strikes a balance between a cappuccino and a doppio.

You’ll fall in love with a mocha, all you chocolate lovers out there (or maybe you already have). The mocha is an espresso-based chocolate beverage with steamed milk and foam.

An espresso shot is a ristretto. In contrast to the harsh flavor of a standard shot of espresso or a latte, it uses less hot water to achieve a sweeter flavor.

This Australian-made beverage is essentially a cappuccino without the foam or chocolate garnish. The beverage is an espresso with steamed milk.

The affogato provides a justification for eating ice cream at any time of day (and any time of year in my opinion). served with a shot or two of espresso and a scoop of ice cream. Serving the affogato over a brownie makes it extra delicious.

For the coffee purist who wants a little more flavor, café au lait is ideal. You’re ready to go with only a splash of warm milk in your coffee!

Irish coffee is made with black coffee, whiskey, sugar, and whipped cream on top.

The amount of coffee traded globally today is only surpassed by oil. Every year, 400 billion cups of coffee are drunk. It’s highly likely that people will continue to drink coffee for a very, very long time.

We all have a role in the history of coffee, from the early monks and goat herders who chewed the coffee berries and brewed unroasted coffee to the barista competitions and carefully poured hearts in our lattes.

Although I doubt things will be any better than they are now, I have no doubt that spirited little bean will find another way to stir things up.