Who are Amish People?

Amish people are a group of traditionalist Christian church fellowships with Swiss German and Alsatian Anabaptist origins. They are closely related to Mennonite churches. The Amish are known for simple living, plain dress, Christian pacifism, and slowness to adopt many conveniences of modern technology, with a view to not interrupt family time, nor replace face-to-face conversations whenever possible. The Amish value rural life, manual labor, humility, and Gelassenheit, all under the auspices of living what they interpret to be God’s word.

They are a distinctive Christian subculture that traces its roots to the 16th century Protestant Reformation. Scholars define the Old Order Amish by two distinctive features: The use of horse-and-buggy transportation. The use of Pennsylvania German dialect in church services and daily conversation.

There are some 40 different subgroups of Old Order Amish. All the subgroups adhere to the 18 articles of Christian faith found in the Dordrecht Confession of Faith, written in 1632. Because theological authority rests within each of the approximately 1,925 local congregations, the different subgroups and congregations vary in how they apply the principles of their faith to daily life. Especially as it relates to dress styles, technology, and the amount of interaction with the outside world.

Despite variations between the many subgroups, the vast majority of Old Order Amish communities terminate formal education at the eighth grade, meet in homes for religious services, wear distinctive plain clothing, and reject television, online access, and public utility electricity. Despite these distinctive practices a lot of people confuse the Amish with other somewhat similar groups who are not, in fact, Amish at all.

Amish church membership begins with baptism, usually between the ages of 16 and 23. It is a requirement for marriage within the Amish church. Once a person is baptized within the church, he or she may marry only within the faith. Church districts have between 20 and 40 families and worship services are held every other Sunday in a member’s home or barn. The district is led by a bishop and several ministers and deacons who are chosen by a combination of election and cleromancy.

The rules of the church, the so-called Ordnung, which differs to some extent between different districts, is reviewed twice a year by all members of the church. Only if all members give their consent to it, Lord’s Supper is held. The Ordnung must be observed by every member and covers many aspects of day-to-day living, including prohibitions or limitations on the use of power-line electricity, telephones, and automobiles, as well as regulations on clothing. As present-day Anabaptists, Amish church members practice nonresistance and will not perform any type of military service. The Amish value rural life, manual labor, humility, and Gelassenheit, all under the auspices of living what they interpret to be God’s word.

The Way of Life

Amish lifestyle is regulated by the rules (Ordnung), which differs slightly from community to community and from district to district within a community. What is acceptable in one community may not be acceptable in another. The Ordnung is agreed upon or changed within the whole community of baptized members prior to Communion which takes place two times a year. The meeting where the Ordnung is discussed is called Ordnungsgemeine in Standard German and Ordningsgmee in Pennsylvania Dutch. The Ordnung include matters such as dress, permissible uses of technology, religious duties, and rules regarding interaction with outsiders. In these meetings, women also vote in questions concerning the Ordnung.

Bearing children, raising them, and socializing with neighbors and relatives are the greatest functions of the Amish family. Amish typically believe that large families are a blessing from God. Farm families tend to have larger families, because sons are needed to perform farm labor. Community is central to the Amish way of life.

Working hard is considered godly, and some technological advancements have been considered undesirable because they reduce the need for hard work. Machines such as automatic floor cleaners in barns have historically been rejected as this provides young farmhands with too much free time.

The Amish are known for their plain attire. Men wear solid colored shirts, broad-brimmed hats, and suits that signify similarity amongst one another. Amish men grow beards to symbolize manhood and marital status, as well as to promote humility. They are forbidden to grow mustaches because mustaches are seen by the Amish as being affiliated with the military, which they are strongly opposed to, due to their pacifist beliefs. Women have similar guidelines on how to dress, which are also expressed in the Ordnung, the Amish version of legislation.

They are to wear calf-length dresses, muted colors along with bonnets and aprons. Prayer caps or bonnets are worn by the women because they are a visual representation of their religious beliefs and promote unity through the tradition of every woman wearing one. The color of the bonnet signifies whether a woman is single or married. Single women wear black bonnets and married women wear white. The color coding of bonnets is important because women are not allowed to wear jewelry, such as wedding rings, as it is seen as drawing attention to the body which can induce pride in the individual. All clothing is sewn by hand, but the way to fasten the garment widely depends on whether the Amish person is a part of the New Order or Old Order Amish. The Old Order Amish seldom, if ever, use buttons because they are seen as too flashy. Instead, they use the hook and eye approach to fashion clothing or metal snaps. The New Order Amish are slightly more progressive and allow the usage of buttons to help attire clothing. 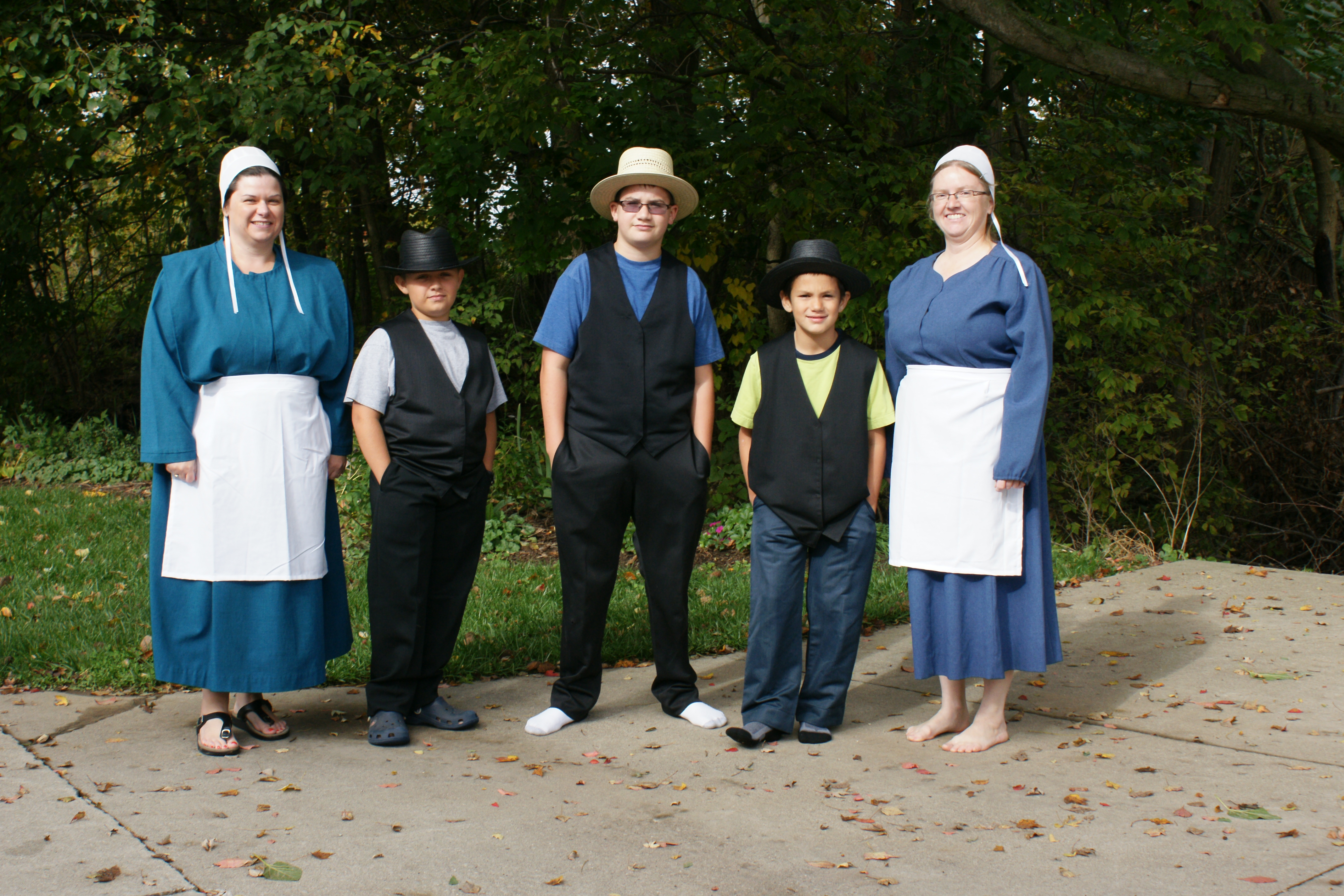 Amish cuisine is noted for its simplicity and traditional qualities. Food plays an important part in Amish social life and is served at potlucks, weddings, fundraisers, farewells, and other events. Many Amish foods are sold at markets including pies, preserves, bread mixes, pickled produce, desserts, and canned goods. Many Amish communities have also established restaurants for visitors. Amish meat consumption is similar to the American average though they tend to eat more preserved meat.

Most Old Order Amish speak Pennsylvania Dutch, and refer to non-Amish people as “English”, regardless of ethnicity. Some Amish who migrated to the United States in the 1850s speak a form of Bernese German or a Low Alemannic Alsatian dialect.

Today, almost all Amish are functionally bilingual in Pennsylvania Dutch and English. However, domains of usage are sharply separated. Pennsylvania Dutch dominates in most in-group settings, such as the dinner table and preaching in church services. In contrast, English is used for most reading and writing. English is also the medium of instruction in schools and is used in business transactions and often, out of politeness, in situations involving interactions with non-Amish. Finally, the Amish read prayers and sing in Standard German at church services. The distinctive use of three different languages serves as a powerful conveyor of Amish identity. “Although ‘the English language is being used in more and more situations,’ Pennsylvania Dutch is ‘one of a handful of minority languages in the United States that is neither endangered nor supported by continual arrivals of immigrants.

During that time, they established 184 new settlements and moved into six new states. In 2000, about 165,620 Old Order Amish resided in the United States, of whom 73,609 were church members. The Amish are among the fastest-growing populations in the world, with an average of seven children per family in the 1970sand a total fertility rate of 5.3 in the 2010s.

In 2010, a few religious bodies, including the Amish, changed the way their adherents were reported to better match the standards of the Association of Statisticians of American Religious Bodies. When looking at all Amish adherents and not solely Old Order Amish, about 241,000 Amish adherents were in 28 U.S. states in 2010. 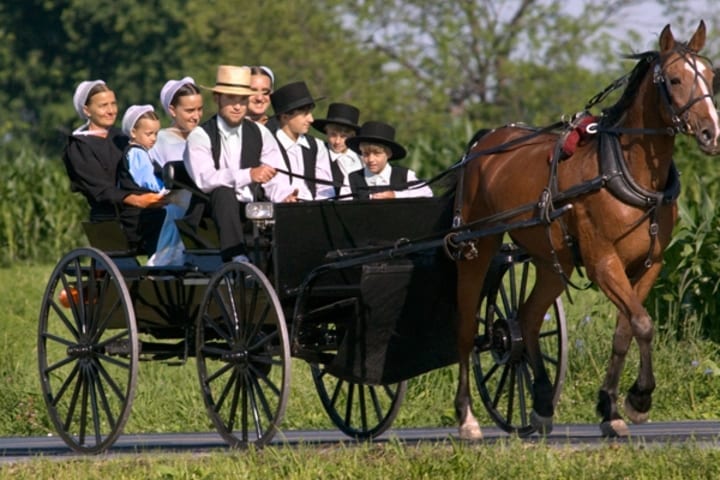