As you all know, Antibiotics are proven medicines used to prevent and treat bacterial infections over years in medical history, where these drugs can kill or inhibit growth of bacteria to cure infections in people, animals and sometimes plants. Can you imagine what would happen when the drug efficiently proven as treatment for most common diseases over years, now become no longer effective? Which means bacteria have weaponized against the threat of antibiotics or simply bacteria do not care about antimicrobials? Let’s investigate what has happened!

The modern era of antibiotics started with the discovery of penicillin by Sir Alexander Fleming in 1928. Since then, antibiotics have transformed modern medicine and saved millions of lives. Antibiotics have not only saved patients’ lives, but they have also played a pivotal role in achieving major advances in medicine and surgery. They have successfully prevented or treated infections that can occur in patients who are receiving chemotherapy treatments; who have chronic diseases such as diabetes, end-stage renal disease, or rheumatoid arthritis; or who have had complex surgeries such as organ transplants, joint replacements, or cardiac surgery.

Antibiotics have also helped to extend expected life spans by changing the outcome of bacterial infections. In 1920, people in the U.S. were expected to live to be only 56.4 years old; now, however, the average U.S. life span is nearly 80 years. Antibiotics have had similar beneficial effects worldwide. In developing countries where sanitation is still poor, antibiotics decrease the morbidity and mortality caused by food-borne and other poverty-related infections. Antibiotics were first prescribed to treat serious infections in the 1940s. Penicillin was successful in controlling bacterial infections among World War II soldiers. However, shortly thereafter, penicillin resistance became a substantial clinical problem.

Antibiotic or antimicrobial resistance is one of the biggest threats to global health, food security, and development today. Antibiotic resistance occurs when bacteria change in response to antibiotics or in other words, antibiotics have lost their ability to kill or stop the growth of the bacteria, becoming more harder to treat and eliminate. Figure below illustrates the history of events in anti-bacterial resistance, where it shows the emerging of resistant bacteria and new antibiotics invented to fight over such new bacteria. 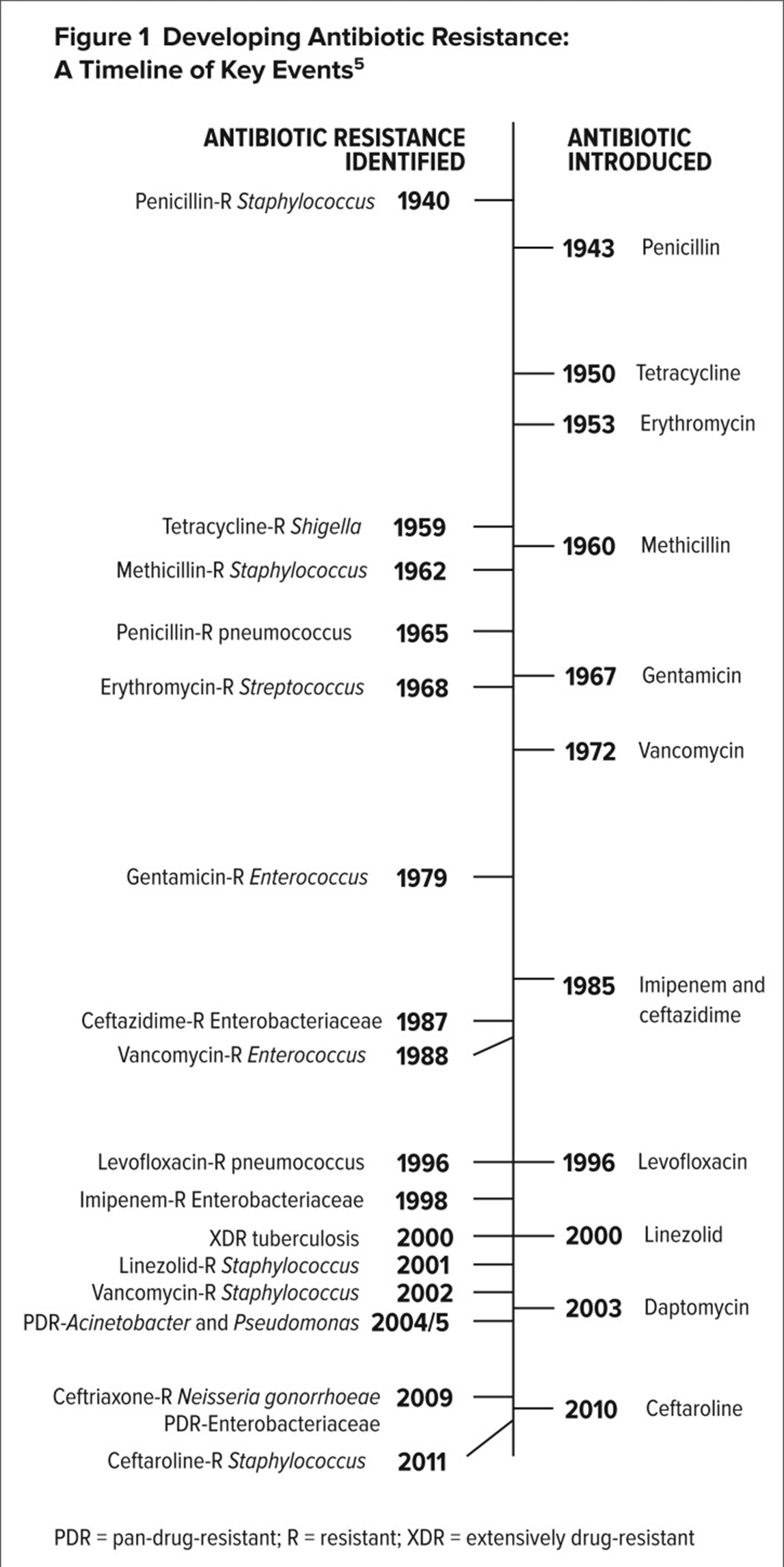 It’s natural that, some bacteria are inherently resistant to certain antibiotics (intrinsic resistance). But the problem arises when some bacteria that causes common diseases, that are usually susceptible to antibiotics, become resistant because of genetic changes (acquired resistance) over many reasons.

Overuse of antibiotics become the major cause for antibacterial resistance. As early as 1945, Sir Alexander Fleming raised the alarm regarding antibiotic overuse when he warned that the “public will demand the drug and then will begin an era of abuses.” The overuse of antibiotics clearly drives the evolution of resistance. Epidemiological studies have demonstrated a direct relationship between antibiotic consumption and the emergence and dissemination of resistant bacteria strains. In bacteria, genes can be inherited from relatives or can be acquired from nonrelatives on mobile genetic elements such as plasmids, where resistance to be transferred among different species of bacteria. Resistance can also occur spontaneously through mutation. Despite warnings regarding overuse, antibiotics are overprescribed worldwide.

Now, we will look at the causes of this problem.

In many countries, antibiotics are unregulated and available over the counter without a prescription. This lack of regulation results in antibiotics that are easily accessible, plentiful, and cheap, which promotes overuse. The ability to purchase such products online has also made them accessible in countries where antibiotics are regulated.

Another reason can be stated as the improper usage or prescribed doses. When a physician prescribes a course of antibiotics, it is important to consume the course in fully in prescribed dose to prevent and cure the disease completely. Usually, what patients does is take the drugs for first few days until symptoms get vanished and then stops the dose. This behavior becomes a major cause creating platform to emerging of antibiotic resistance bacteria. Initially the drug is working over bacterial infection to kill or deactivate its behavior, where bacteria also fight against the drug. When this process is been continued, the patient stops the dose of the antibiotic, which leads the bacteria to win the fight when no longer there is no drug to threaten them. Then the bacteria learn and mutate itself to be resistance to the given antibiotic. So, more powerful bacteria will be resulted by not completing the prescribed course of the drug. Resistant bacteria survive in the presence of the antibiotic and continue to multiply, causing longer illness or even death. Infections caused by resistant bacteria may require more care as well as alternative and more expensive antibiotics, which may have more severe side effects.

In both the developed and developing world, antibiotics are widely used as growth supplements in livestock. An estimated 80% of antibiotics sold in the U.S. are used in animals, primarily to promote growth and to prevent infection. Treating livestock with antimicrobials is said to improve the overall health of the animals, producing larger yields and a higher-quality product.

Extensive use of antibiotics in agriculture and farming industry has become a factor to the resistance. The antibiotics used in livestock are ingested by humans when they consume food. The transfer of resistant bacteria to humans by farm animals was first noted more than 35 years ago, when high rates of antibiotic resistance were found in the intestinal flora of both farm animals and farmers. More recently, molecular detection methods have demonstrated that resistant bacteria in farm animals reach consumers through meat products. This occurs through the following sequence of events:

The agricultural use of antibiotics also affects the microorganisms in a particular environment. Up to 90% of the antibiotics given to livestock are excreted in urine and stool, then widely dispersed through fertilizer, groundwater, and surface runoff. In addition, antibiotics like tetracyclines and streptomycin are sprayed on fruit trees to act as pesticides in some countries, where this application accounts for a much smaller proportion of overall antibiotic use, but the resultant geographical spread can be considerable.

Also, irrational, and inappropriate use of antibiotics in commercial chicken and aquaculture industries accelerate the antibiotic resistance process in humans and animals. Rearing animals for food take time and requires hard work to maintain their health and well-being. Just as in humans, farm animals sometimes get sick and require drugs to treat infections. But organisms that cause infections are becoming increasingly resistant to the available drugs. Another reason is to promote animal growth by supplementing their feed with antibiotics. While this may be economically beneficial for the farmer, helping to grow bigger animals faster, using antibiotics as growth promoters is considered to be inappropriate as it contributes to antimicrobial resistance.

This antimicrobial resistance increases the more a drug is used, and when it is used inappropriately, where this misuse of antibiotics is also having an impact on human health, where resistive bacteria grown n animals can cause serious illnesses on humans, which are not treatable with available anti-microbial drugs. These practices also contribute to the exposure of microorganisms in the environment to growth-inhibiting agents, altering the environmental ecology by increasing the proportion of resistant versus susceptible microorganisms, which aids the growth of antibiotic resistance bacteria.

Not only overuse of antibiotics but poor hygiene and sanitation can also result in anti-microbial resistance in humans. Healthcare settings are hot spots for infectious diseases, including those caused by antibiotic-resistant bacteria. Infections are spread through failures in hygiene, such as poor hand-washing technique, and because measures to prevent and control infections are inadequate or not followed consistently. Failure to wear protective clothing, to dispose of waste safely and to maintain a clean working environment all contribute to the spread of bacteria. A high number of cases of infectious diseases not only increases the demand for antibiotics and drives resistance but also increases mortality and has a negative impact on quality of life. Antibacterial products sold for hygienic, or cleaning purposes may also contribute to this problem, since they may limit the development of immunities to environmental antigens in both children and adults. Consequently, immune-system versatility may be compromised, possibly increasing morbidity and mortality due to infections that wouldn’t normally be severe.

When pharmaceutical industries do not invest and research much on anti-bacterial drug development, it will increase the problem to considerable levels. Antibiotic development is no longer considered to be an economically wise investment for the pharmaceutical industry. Because antibiotics are used for relatively short periods and are often curative, antibiotics are not as profitable as drugs that treat chronic conditions, such as diabetes, psychiatric disorders, asthma etc. A cost–benefit analysis calculated in some companies have found that the net present value (NPV) of a new antibiotic is only about $50 million, compared to approximately $1 billion for a drug used to treat a neuromuscular disease. Because medicines for chronic conditions are more profitable, pharmaceutical companies prefer to invest in them. Another factor that causes antibiotic development to lack economic appeal is the relatively low cost of antibiotics. Newer antibiotics are generally priced at a maximum of $1,000 to $3,000 per course compared with cancer chemotherapy that costs tens of thousands of dollars. The availability, ease of use, and generally low cost of antibiotics has also led to a perception of low value among payers and the public.

In summary, the 6 main causes of antibiotic resistance are:

So, now we know that Antibiotic resistance has the potential to affect people at any stage of life, as well as the healthcare, veterinary, and agriculture industries, making it one of the world’s most urgent public health problems.

In conclusion, antibiotic resistance is rising to dangerously high levels in all parts of the world. New resistance mechanisms are emerging and spreading globally, threatening our ability to treat common infectious diseases. A growing list of infections – such as pneumonia, tuberculosis, blood poisoning, gonorrhea, and foodborne diseases – are becoming harder, and sometimes impossible, to treat as antibiotics become less effective. Rapidly emerging resistant bacteria threaten the extraordinary health benefits that have been achieved with antibiotics. This crisis is global, reflecting the worldwide overuse of these drugs and the lack of development of new antibiotic agents by pharmaceutical companies to address the challenge. Antibiotic-resistant infections place a substantial health and economic burden across world health care system and population. Coordinated efforts to implement new policies, renew research efforts, and pursue steps to manage the crisis are greatly needed. Without urgent action, we are heading for a post-antibiotic era, in which common infections and minor injuries can once again kill. WHO is recommending that farmers and the food industry stop using antibiotics routinely to promote growth and prevent disease in healthy animals.

The WHO trying to find ways and provide recommendations aim to help preserve the effectiveness of antibiotics that are important for human medicine by reducing their unnecessary use in animals, and many research are currently being conducted to find a viable and sustainable solution to this massive scale problem affecting worldwide existence of humans and animals.