Moving forward with Right to Information

In Democratic Socialist Republic of Sri Lanka, as the name ‘republic’ points out, the state belongs to the people and is maintained by the tax money of the people. Therefore people have the right to know information regarding the state and the institutions, which enables them to involve in the governance. However that has not been the case for few decades due to the lack of legislation towards the right to know information. There are lots of talks of corruption and inefficiency in state sector but people suffered the inability to get information on such matters. However, one of the most revolutionary developments of the past few decades, the Right to Information Act has emerged as the answer.

Brief history about Right to Information in Sri Lanka

“Liberties aren’t given, they are taken.” - Aldous Huxley

In 1994, The Right to Information discussions has been taken to surface with the parliamentary election by few media associations and civil society organizations. Same year with the newly appointed government, Travel Information and Aviation Minister introduced a cabinet paper “Media Policy of the Government” which has a clause about accepting Right to Information and giving constitutional protection for it.

In 1996, Sri Lanka Legal Commission introduced a bill about access to information where they accepted the unsatisfactory situation related to the Legal regime. Same year, the Media Ministry appointed R.K.W Gunasekara Committee to reform laws affecting Freedom of the Press and Freedom of Expression and in their report 3rd recommendation was about including Right to Information under the Right to Freedom of Expression according to the International Convention on Civil and Political Rights.

In 2010, a new bill about access to information was introduced by a committee appointed by Justice Minister with the opinions of Press institute and the Editors Guild. However the minister lost the election that year and no one carried out the bill. Same year again a bill about Right to Information was introduced to the parliament by opposition but was withdrawn due to protests from the government.

In 2015, parliament passed the 19th Amendment to the Constitution Act on 28th April 2015, and certified into law by the Speaker 15th May 2015. With this, Freedom of information has been added to the Fundamental Rights Chapter, making it a judicially enforceable right. Media and parliamentary affairs minister brought a cabinet paper to bring the RTI act and the responsibility of making the bill was assigned to ministry of media and parliamentary affairs, ministry of public administration and to the ministry of Justice. A committee was appointed with representatives of media and civil associations.

In 2016 Right to Information bill was introduced to the parliament and passed on 24th June with amendments from opposition and government without a parliament vote. Speaker signed the act on 04th August 2016. Legislative Council requested Editors, Publishers, Journalist’s Associations and Civil Associations to propose names for the RTI commission and on 30th September 2016 President appointed three commissioners to the RTI Commission.

“Whereas the Constitution guarantees the right of access to information in Article 14A thereof and there exists a need to foster a culture of transparency and accountability in public authorities by giving effect to the right of access to information and thereby promote a society in which the people of Sri Lanka would be able to more fully participate in public life through combating corruption and promoting accountability and good governance.”

In the section for establishment of the right to information commission states that it shall consist of five persons appointed by the President upon the recommendation of the Constitutional Council. It also states what categories the persons shall be chosen, and the restrictions and guidelines on how persons shall be recommended, the duties of the commission and the power it consists.

In the section for duties of ministers and public authorities states that it shall be the duty of every public authority to maintain all its records duly catalogued and indexed in such form as is consistent with its operational requirements which would facilitate the right of access to information as provided for in this Act. The term Public Authorities refers to government ministries, government departments, public corporations, local authorities, institutions created by a Provincial Council, non-government organizations, institutes of higher education, private educational institutes, courts, tribunals and institutions created to serve justice. 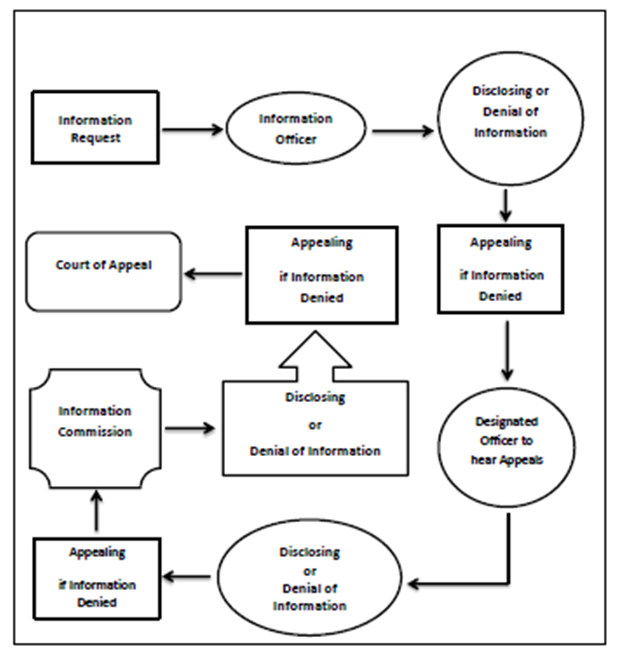 The RTI process can be simplified into following important steps.

In order to RTI process work effectively there are few key areas that has to function properly. Public authorities has to maintain all their records duly catalogued and indexed in such form as is consistent with its operational requirements which would facilitate the right of access to information. And also they need to publish details of facilities available to citizens for obtaining information. The person who requests information also has a responsibility to provide all the necessary details to identify the information requested and the formats and language preferred.

Sri Lanka has been impressive in the Implementation of Right to Information since the act passed. The Right to Information Rating program, founded by Access Info Europe (AIE) and the Centre for Law and Democracy (CLD), rank Sri Lanka currently in 3rd place in their global ranking system. That is huge achievement considering the short period of time it has been taken to get up to this level since the act passed. However it can improve a lot more by integrating with information technology.

Sri Lanka is a country with huge potential in IT sector, currently ranked 13 in the Global Services Location Index by AT Kearney, emerging as one of the top IT outsourcing destinations. However it has been visible that state sector is lacking the integration with IT. It has been same for the implementation of the RTI. It would be a duty of related authorities to make way towards integrating IT with RTI process as well as it would be responsibility of IT sector personals for proposing such solutions. Following are few areas which IT can be used for the improvement of RTI.

Above are two simple suggestions that the writer had when reading the publications about RTI act. It’s clear that combining RTI with Information Technology, it will direct at implementation of E-Governance, application of Information Technology on governance, which would be a broader area. In fact the RTI can be identified as the legal framework which removed most of the blockades that were preventing the movement towards the E-Governance. The work to be done towards the IT integration would take huge effort, will have substantial cost and will take considerable time but it would be the way forward with Right to Information.

We have to pay our gratitude towards some personals and civil society organizations including civil rights activists, media organizations for the long struggle which spanning over a decade towards Right to Information. Since now it’s in implementation, the IT community also has a responsibility to finding and proposing the solutions to improve the implementation of Right to Information.

RTIC orders SriLankan Airlines to disclose salaries of its management

Two successful occasions how people used their Right to Information